The 'Key Themes' posts are a series of short articles outlining the role that geologists have in various aspects of global development.
One of the biggest issues in developing countries is access to clean water and good sanitation. Current estimates suggest that nearly 900 million people lack access to clean water, and 2.6 billion people lack access to good sanitation. 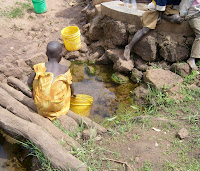 Water is essential for life, in cases where communities don’t have access to clean water they are forced to drink dirty and dangerous water. This water can cause serious illness, sometimes leading to death. Many communities have to walk several kilometres to collect their water – in some cases this water is clean, in other cases it is unsafe but the closest or only water source around.
A lack of access to clean water also has a direct impact on many other areas of development. Usually it is women or children who collect the water, meaning children miss school and lose out on their education. Women lose out on income-generating activities, as they are devoted to collecting water, they make themselves vulnerable by walking to often-isolated places alone, and are forced to carry large volumes of water on a daily basis.
What role do geologists have to play in this sector? 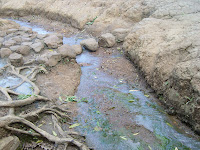 Geologists play a crucial role in the discovery, access and sustainable management of clean water supplies through the study and application of hydrogeology.
Hydrogeology is the study of the distribution and movement of water below the surface of the earth. Groundwater is often preferred to surface water as it is generally protected from contamination that can occur on the surface. As the water percolates through soil and rock the water is filtered to remove contaminants. It is also protected from the high temperatures, and thus evaporation, that is common in many developing countries. 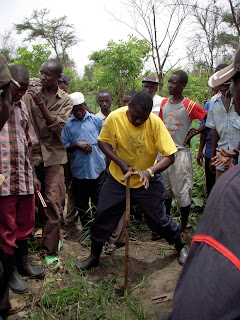 Most groundwater is derived from rainfall, with some also coming from surface water features such as rivers and lakes. A proportion of rainfall infiltrates the ground, percolating through soil and rock to form underground stores of water in a particular rock/soil unit (known as an aquifer). A geologist has a role in locating these aquifers, determining how much water is in them and whether it is safe to use, and how they can be sustainably exploited.
An understanding of the geology of an area can give an indication of where water resources can be located, where to drill for water, and how deep to drill. Techniques such as geophysics can also be used to provide additional information and is making a huge difference to the drilling of boreholes across developing nations.
Posted by Joel Gill at 17:40

Welcome to Geology For Global Development, a series of articles and discussions, photos and links - all relating to the application of the geosciences to international development.
For further information on Geology for Global Development (GfGD) please visit our main website at www.gfgd.org, or get in contact if you have any questions, comments or are interested in writing as a guest blogger.

Joel Gill
London, United Kingdom
Joel is a UK-based geologist with a keen interest in the application of geology to international development. He is the Director/Founder of Geology for Global Development (GfGD), primary writer, and chief-editor of the GfGD Blog.