Crisis in the Horn of Africa (2) - Long-Term Development 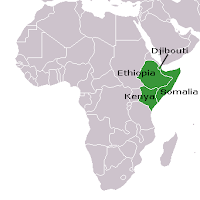 As outlined in Part 1 of this post, there are urgent and immediate needs in the Horn of Africa as millions face starvation and a humanitarian crisis. However there must also be discussion about how to avoid this level of crisis in the future, how to reduce and mitigate the hazard, reduce vulnerability and increase resilience. This post does not aim to provide a comprehensive solution to the problem, but contribute to the discussion with some of the key roles geologists can play in bringing long-term development.
(1) Causes of the Crisis
There are a number of reports about this hazard being a result of climate change, others say it is related to corruption and poor governance, and others that it is to do with conflict.
Conflict and poor governance in the region has most certainly increased vulnerability to hazards. For example, conflict in Somalia has resulted in a significant number of people displaced, and governance in regions of Somalia is virtually non-existent. Limited humanitarian access has also exacerbated the problem. Vulnerability due to poor economic development also plays a role, with limited infrastructure, problems with trade and a lack of good irrigation systems using groundwater resources.

In terms of climate change, GfGD is wary about attributing anything and everything to human induced climate change without sufficient evidence. The Guardian, perhaps irresponsibly, wrote an article with the title "Drought in East Africa the Result of Climate Change and Conflict" while stating in the actual text that 'how far the current conditions.... can be attributed to climate change is not clear." The Guardian state that the latest IPCC report suggests this region will become wetter, where as other research suggests it may increase drought in the region. A joint publication by the Overseas Development Institute and British Geological Survey (Calow & MacDonald, 2009) draws some conclusions about the potential effects of climate change on Africa. These conclusions are that: -
The report does highlight however, that it is much easier to model future temperature changes than rainfall. It is therefore possible that there are links between the crisis in East Africa and a changing climate, though I find it difficult to justify the title of The Guardian's article, and an outright statement that this IS as a result of climate change.
Finally, there is a wider question about food security, access to markets, infrastructure and agricultural development. Harvests have failed because of lack of rainfall. Farmers used to know when the rain would come, and could plan accordingly - however two years of unpredictable and low rainfall has resulted in failed harvests. When food is grown, there is difficulties in getting it to markets - lack of infrastructure means that people are restricted to very local markets.
In conclusion, the crisis can not be pinned upon one factor or another - it is a complex situation, which requires a number of solutions in order to avoid the repeated and cyclic crisis in this region.
(2) Reducing Vulnerability
I am cautious about using the word 'solutions' - but there are a number of things that can be done to reduce the vulnerability of people and increase their resilience. First and foremost must be a real drive to bring long-term peace to the region, build effective and good government and end corruption that robs the people of the long-term economic development they deserve. There must also be investment in infrastructure, agricultural solutions and improved access to groundwater - there is a role for geologists in all of these areas, working alongside many other professionals and stakeholders. 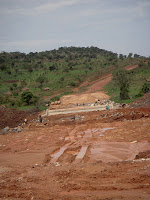 (a) Infrastructure - As outlined in an earlier post, geologists play an important role in infrastructure, especially within transport networks (roads, airstrips, railways etc). Improvements in infrastructure in these countries can ensure products get to market as well as the distribution of food to more rural and pastoral areas. Infrastructure is an expensive development project, but essential to improving economic growth and development in the region. 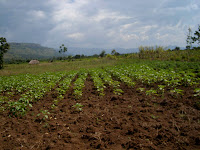 (b) Agriculture - In terms of agriculture, there are a number of ways in which geologists can contribute to problems of soil erosion, loss of soil moisture content and lack of essential minerals in the soil. Natural rock resources can be used to provide essential nutrients to the soils, which are often deficient in phosphorous. Many rocks contain phosphorous minerals, which can be added to the soil as a local fertiliser. The addition of rocks such as scoria (or pumice) can help improve the soil's ability to retain water. This rock reduces evaporation from the soil, while allowing water to permeate through into the soil. Preliminary experiments in Ethiopia found this to improve crop yields significantly. Scoria on the soil surface may also offer protection from soil erosion by wind and rain, retaining the fertile topsoil. 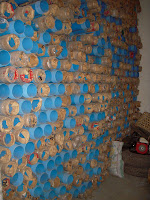 (c) Water Resources - Drilling boreholes to access groundwater is expensive, however in times of drought it is groundwater that proves to be most reliable - often offering access to clean and safe water throughout the year. Reluctance to use groundwater and drill boreholes is often as a result of the expense involved, and concerns that they are not sustainable, involving advanced technology. Indeed, there are too many boreholes that are disused and broken. Groundwater is, however, a significant resource - and with the right infrastructure can be very important to development and long-term food security. It can be used in irrigation systems, for human drinking, and for livestock to drink - which, as mentioned previously, are a crucial asset to many people.
For further information on the short-term emergency requirements please see the links at the end of this previous post.
Posted by Joel Gill at 16:09

Welcome to Geology For Global Development, a series of articles and discussions, photos and links - all relating to the application of the geosciences to international development.
For further information on Geology for Global Development (GfGD) please visit our main website at www.gfgd.org, or get in contact if you have any questions, comments or are interested in writing as a guest blogger.

Joel Gill
London, United Kingdom
Joel is a UK-based geologist with a keen interest in the application of geology to international development. He is the Director/Founder of Geology for Global Development (GfGD), primary writer, and chief-editor of the GfGD Blog.